This TS Triplet APO 150/1000 is the biggest one I recently tested in several steps. At first I was testing a) the scope by itself, later the
b) longitudinal chromatic aberration: This is a Super APO Triplet lens with a very small aberration and a rest chromatic index number of 0.1925.
{0.0 < RC-IndexNumber < 1.0} So it's a colorless refractor for visual observation. In a third step I checked c) the additional field flattener and
its exact distance to the triplet lens and the focus. By using an 40 mm extension tube, the OAZ scale position is 85 units and the focus distance
82 mm. The image up to 52 mm diameter ist perfect, as my artificial sky field test shows. 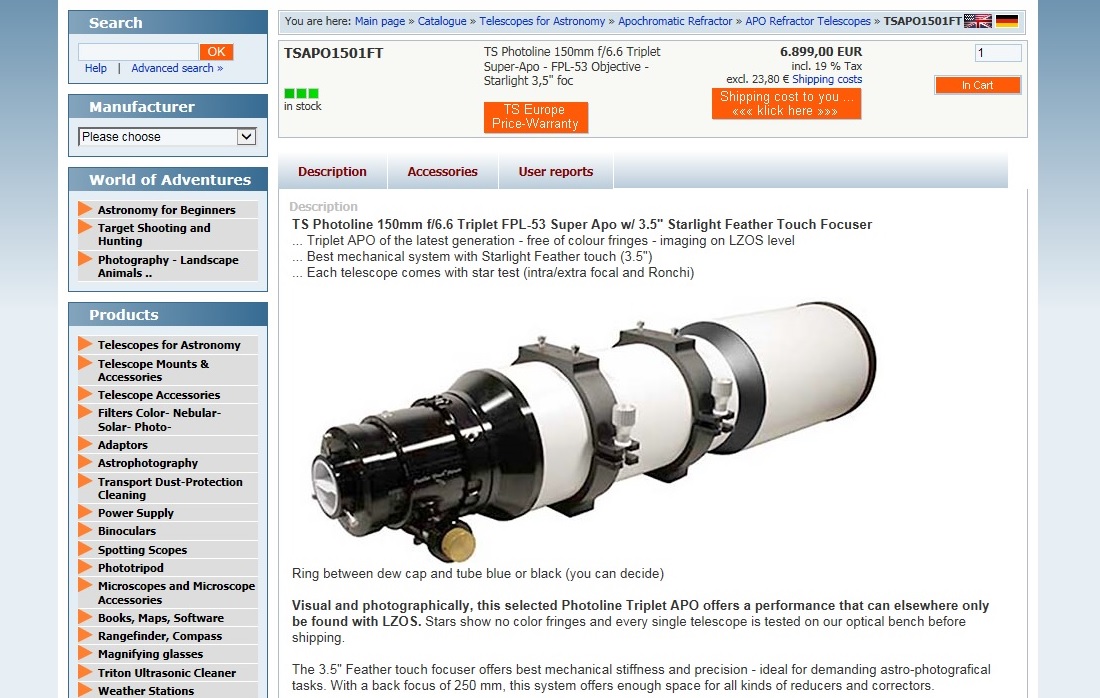 The front side of that Super APO Triplet lens. 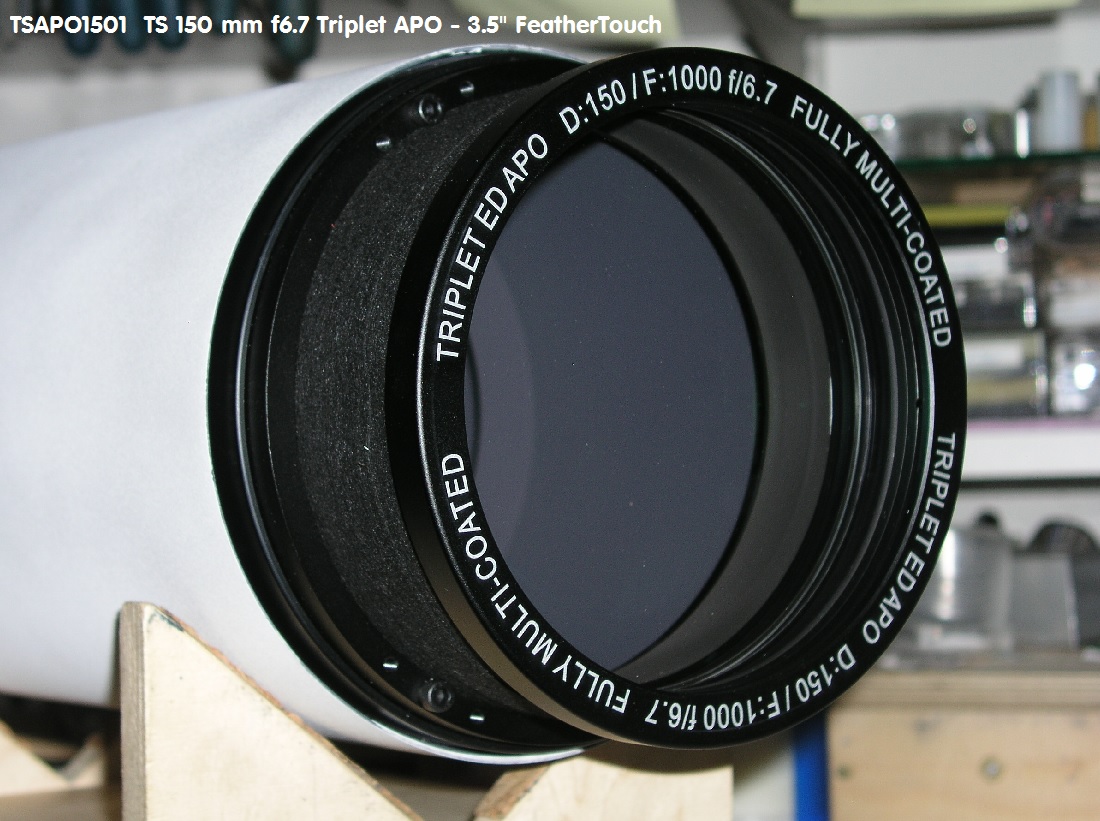 -
The basic scope with Starlight 3.5  Feather Touch Focuser and 2" adapter. 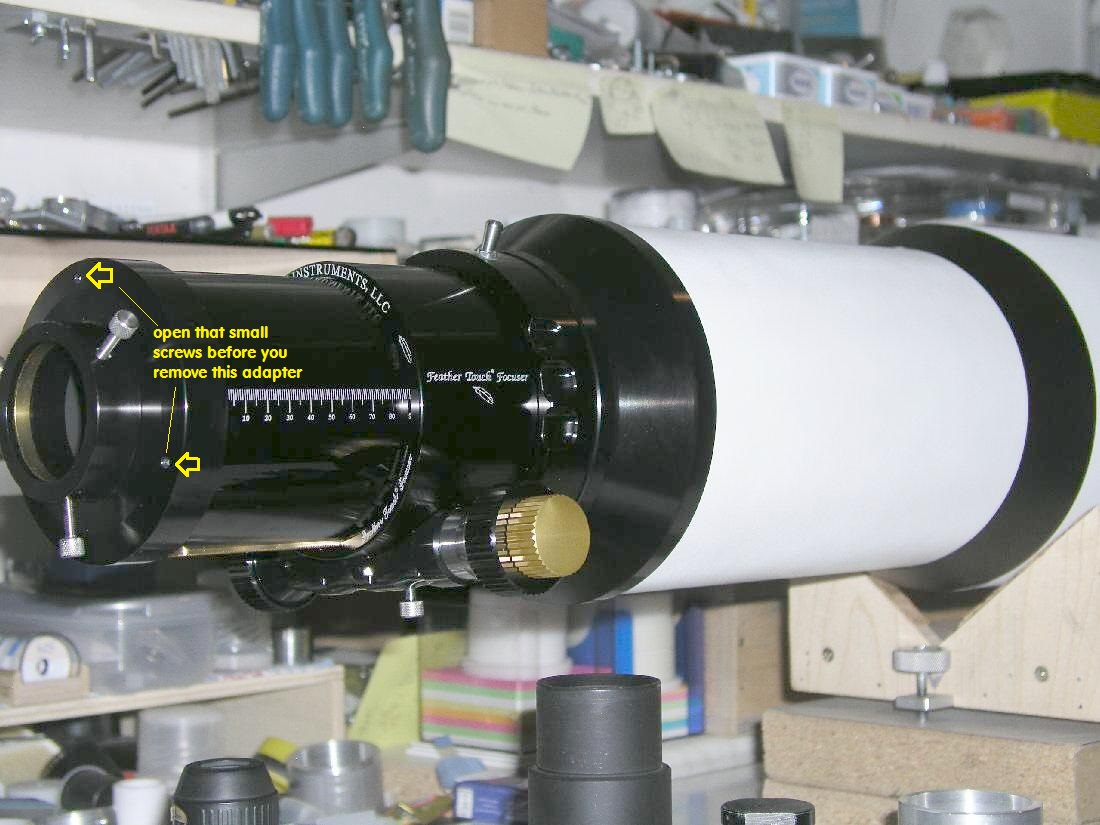 -
This test shows the correct alignment of the triplet lens to the tube. 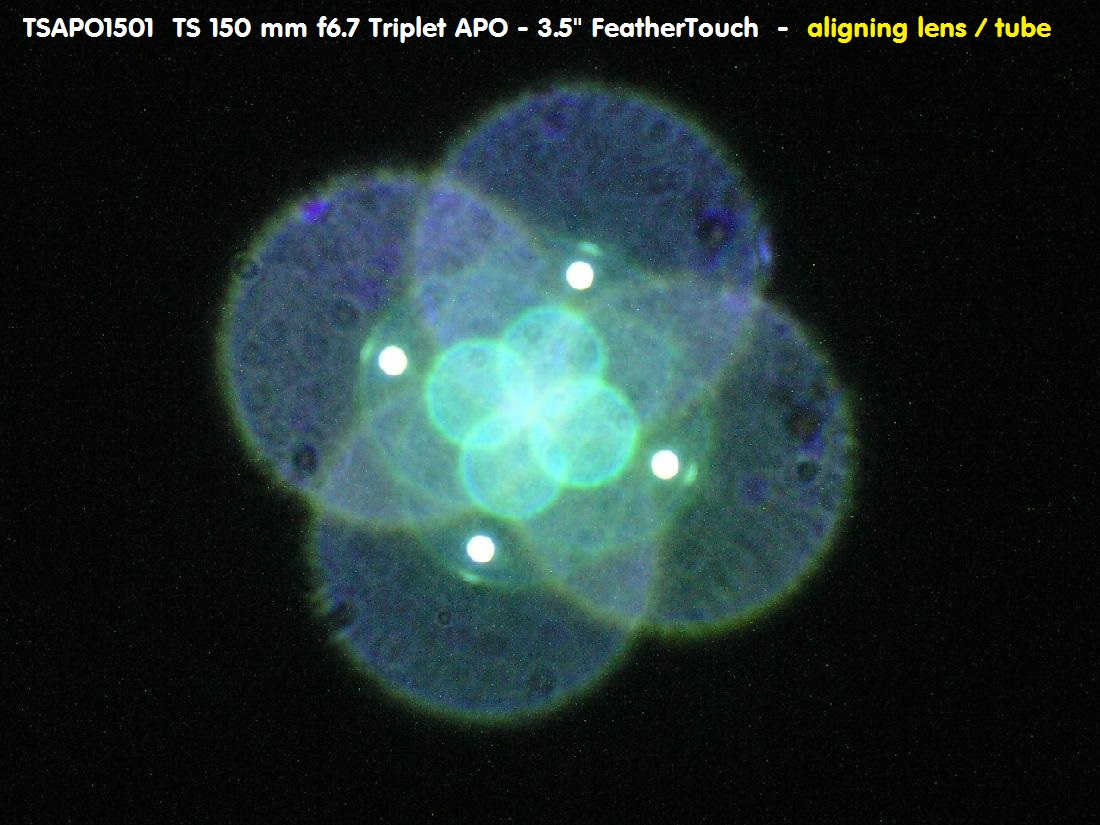 -
The Artificial Sky Test with high magnification shows all optical errors at the beginning of qualitative tests.
See these links:   http://r2.astro-foren.com/index.php/de/schwerpunkt#F041 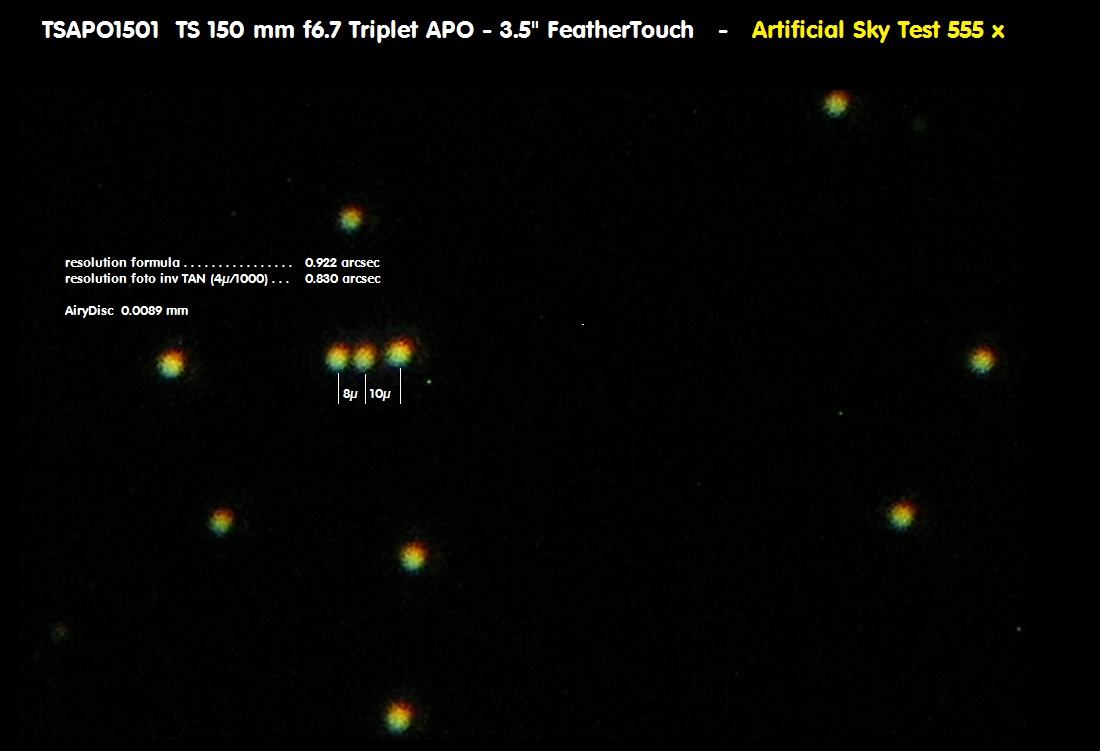 -
The star test shows a lot of different features: At first you get some information intra- and extrafocal about the wavefront errors. Zones, up and down
edges, over- or undercorrected systems, and some information about chromatic aberration, as the next image shows. This test must be verified by other
tests, because it's just a qualitative test and no quantitative one. You always need more than one different tests, to confirm a definite error of a system.

-
These are standard tests. Foucault shows the wavefront, the zones, the spherical error and at last the chromatic aberration. With the Ronchi
test you get an impression of the spherical, in this systems a tiny undercorrected lens. And the Lyot test shows the micro roughness of the
wavefront. An important test for mirror surfaces.

-
This interferogram at 532 nm wave is a quantitative test with a Strehl value of 0.972. 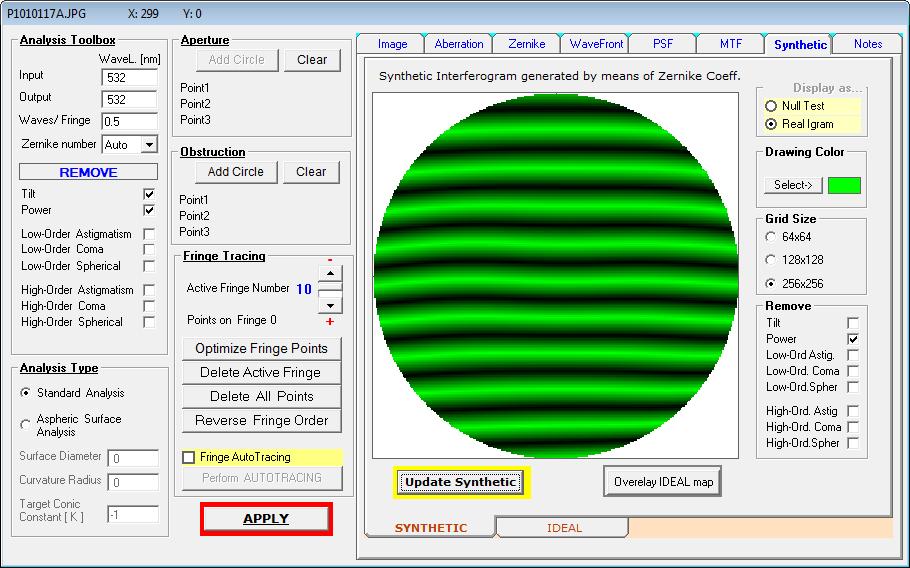 -
The wavefront aberrations shows analogies with the Foucault or Lyot test. 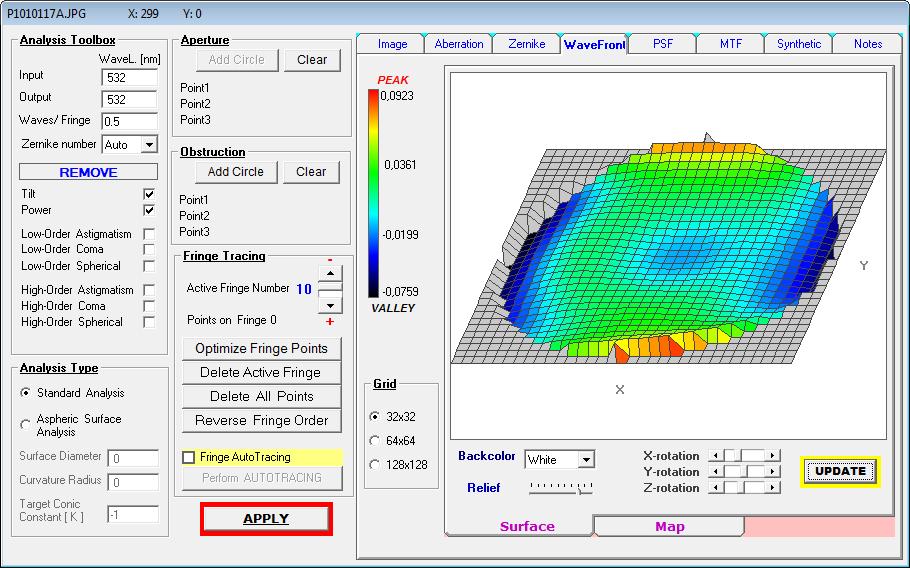 -
The point spread function demonstrates  the distribution of light energy - the optimum for this Super APO Triplet lens. 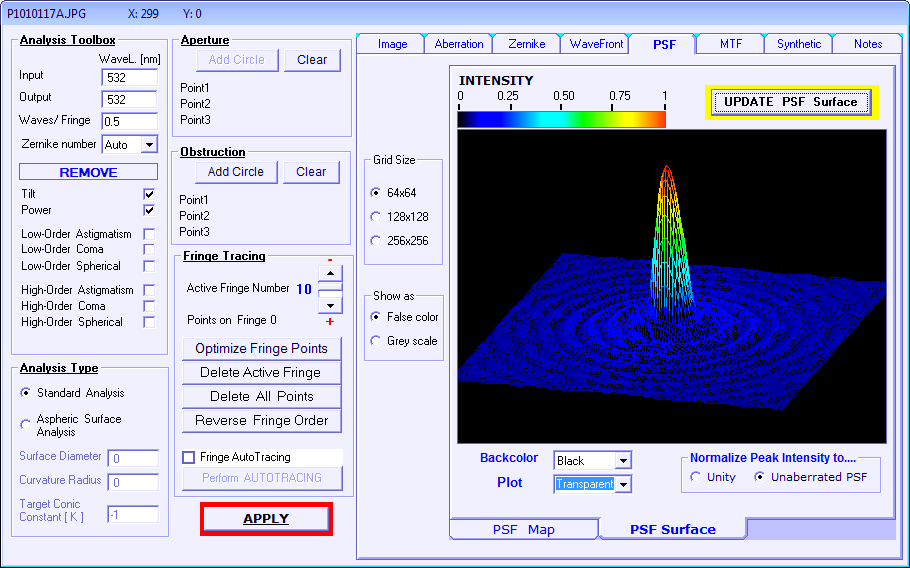 -
And at last the Strehl value includes astigmatism, coma and spherical. 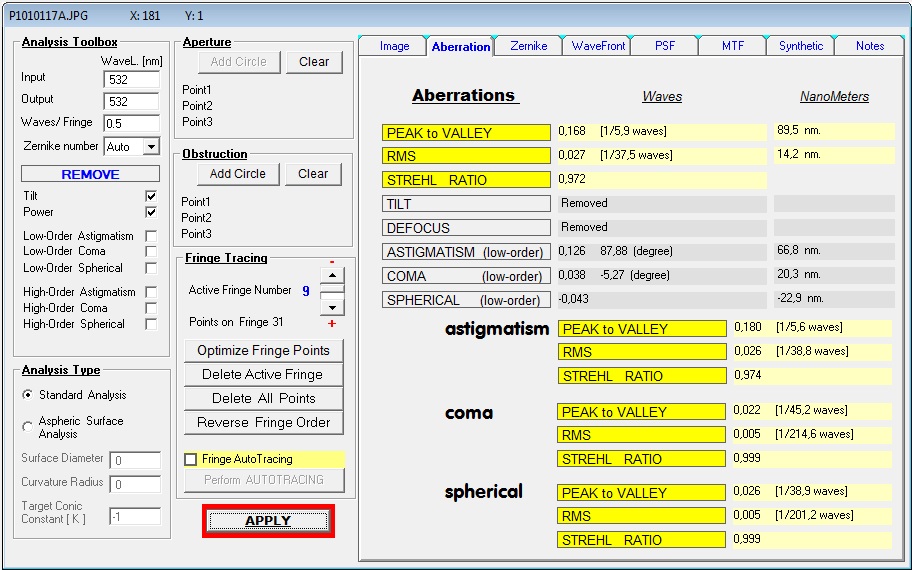 You can calculate the axial chromatic aberration by the fringes of the different colors.  (For example: this would be a normal Fraunhofer lens.)
The color focuses have tiny distances to one another and at last you see the blue spectrum as overcorrected and the red one as undercorrected.
In every case a small value. 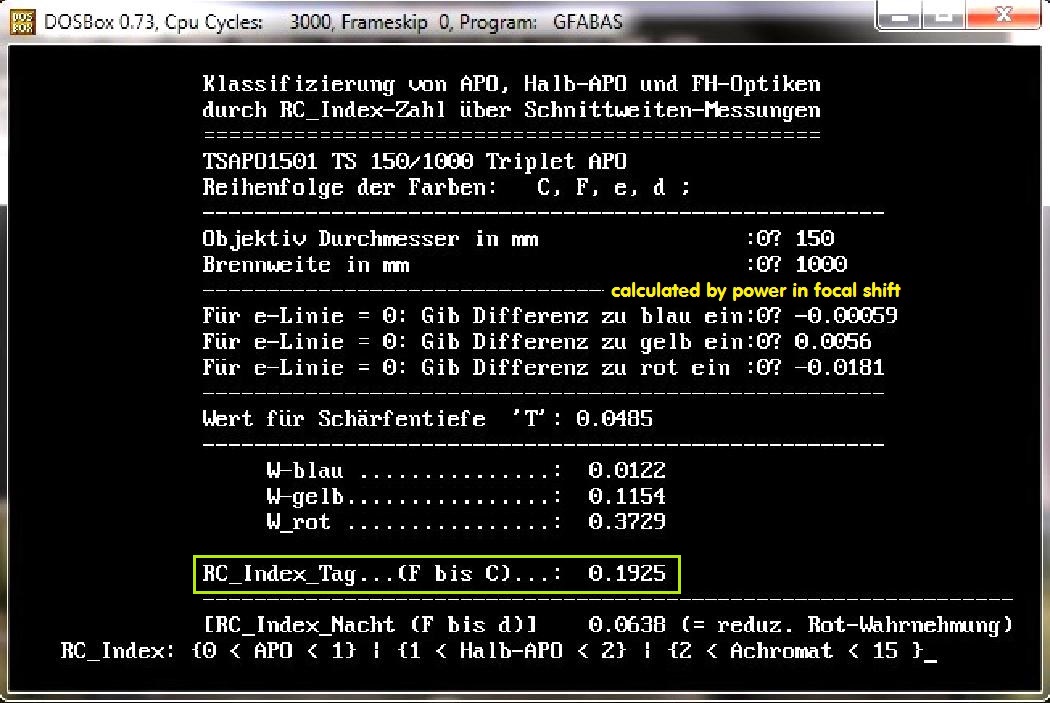 -
This is the list of the color focuses, calculated by the power and sagitta. 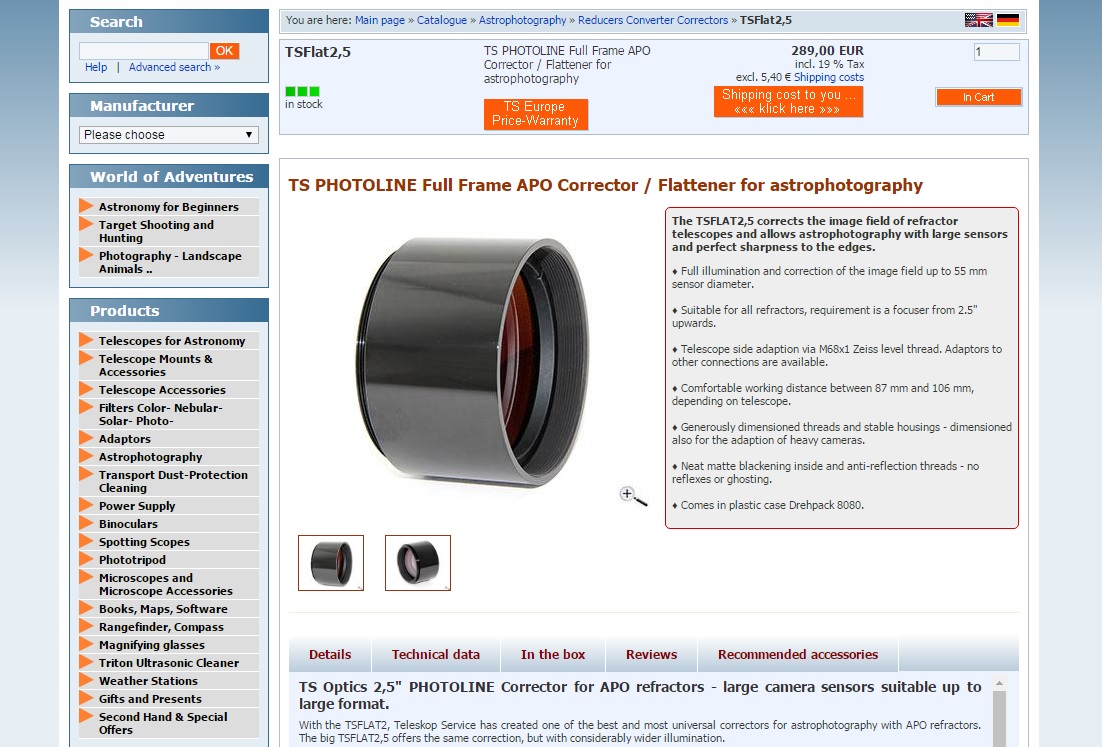 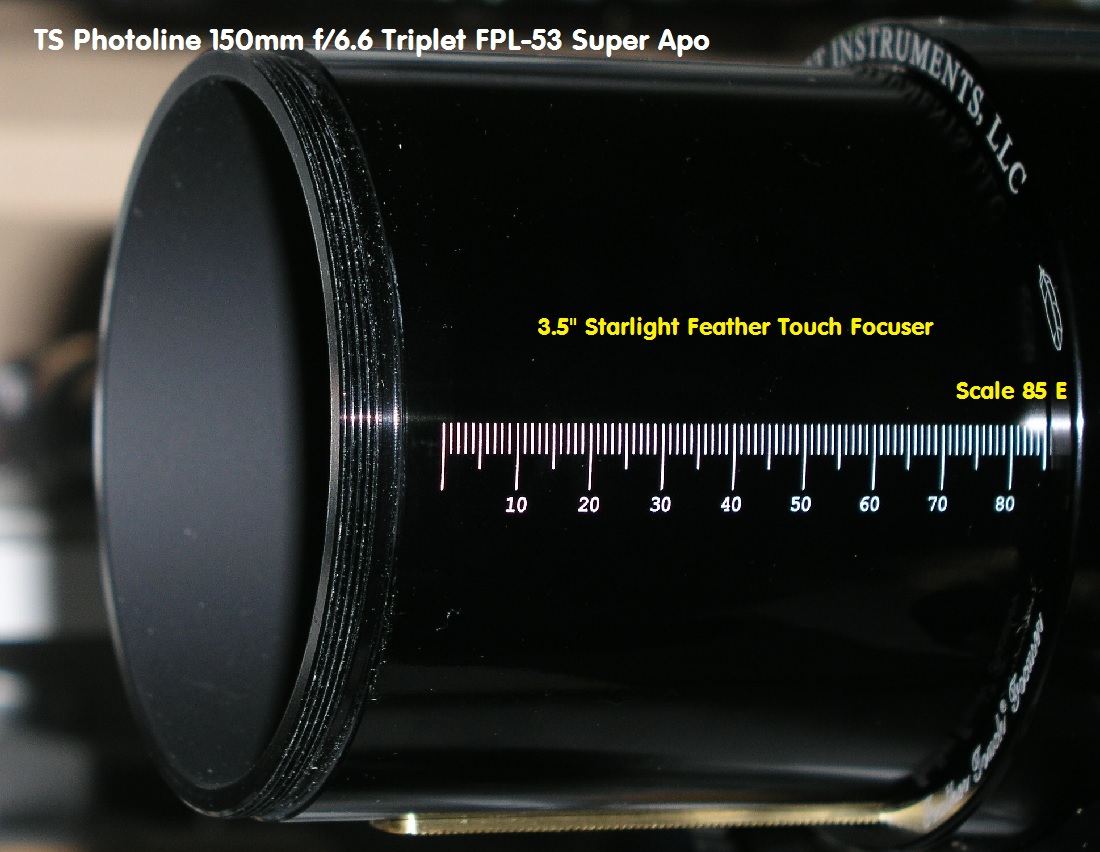 -
This picture  shows it again. 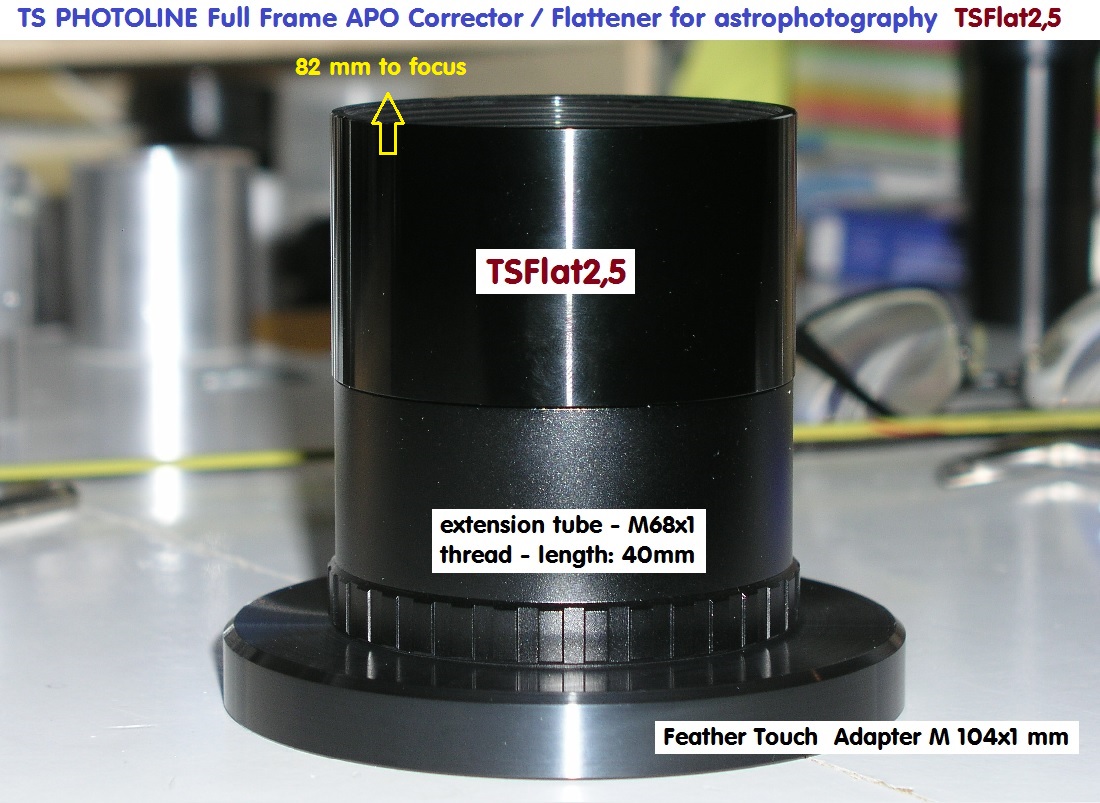 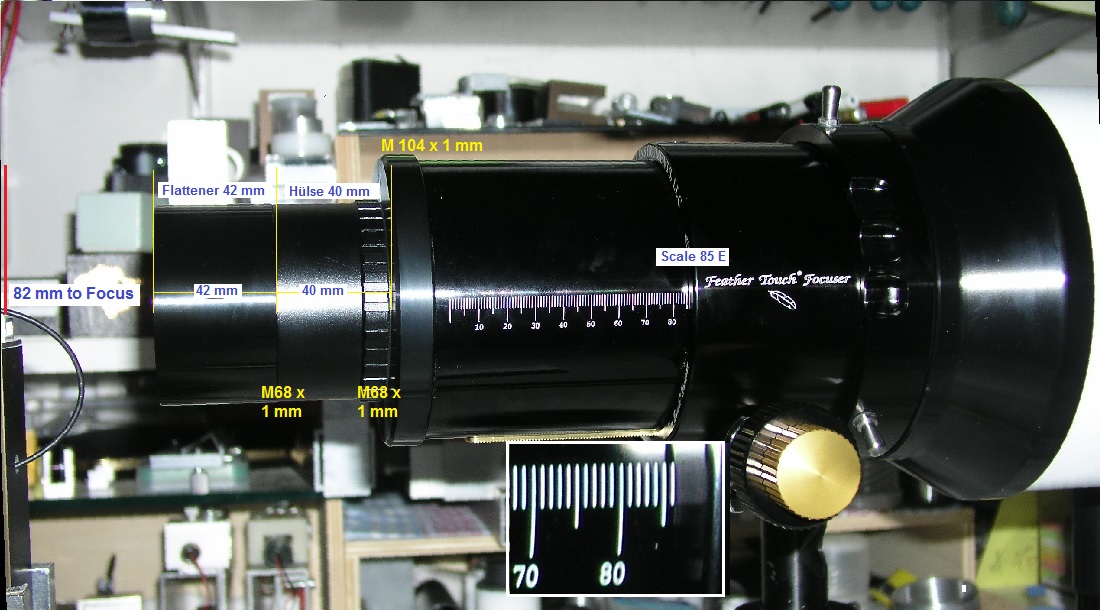 -
You'll get an extended field  with a diameter of 52 mm and more. The overwiev shows  increasing coma and some vignetting. But it's much
smaller than the resolution of the camera sensor as the yellow square shows in the second image.

-
There is no significant difference with Foucault test without and with TSFlat2.5 . 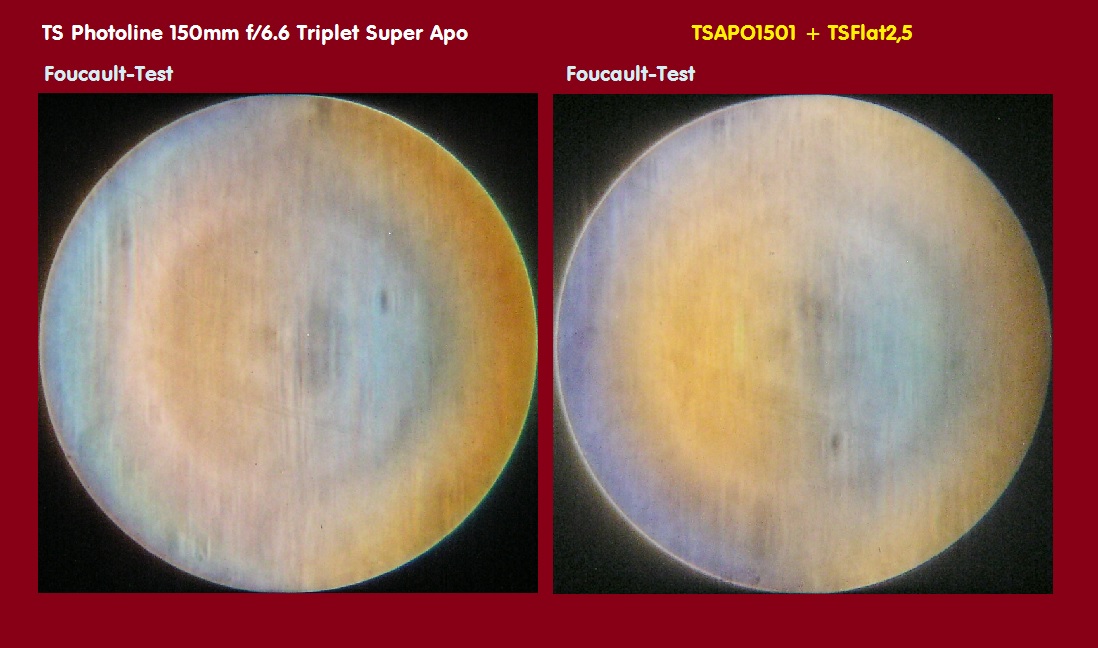 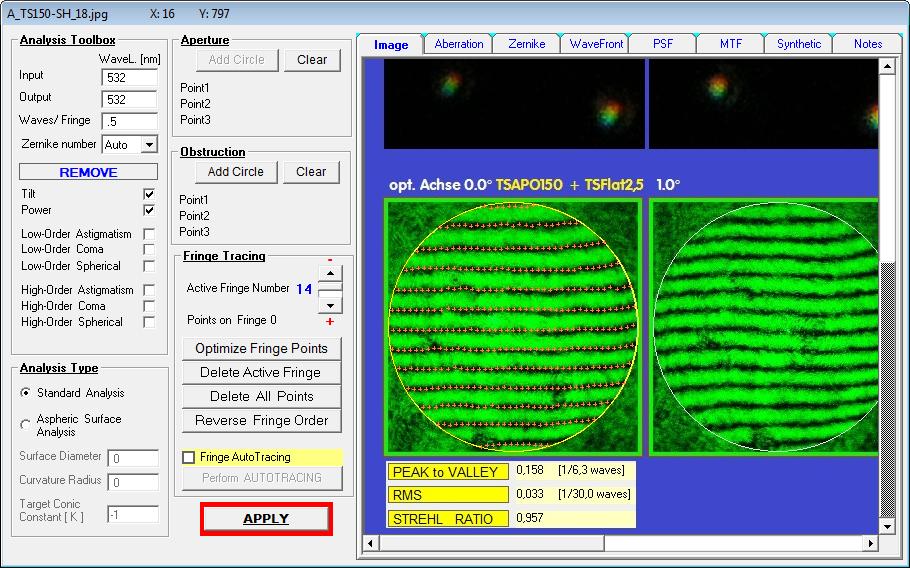 -
If you buy this scope from Takahashi, you would pay the double amount. 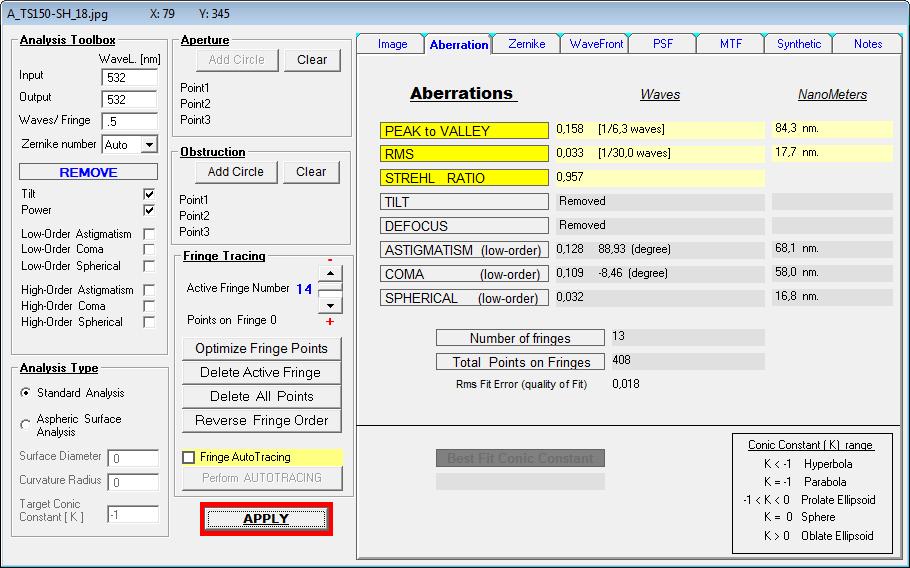 -
This scope is a high-end system for visual and for photographic use.