D057 How to test a RC-System Libor

This RC-System was grindet some years ago anywhere in Europe, and my part was to test this system. Now there is
another friend who is making a RC-system and my report will show, how to test the primary and the secondary by
compensation with BK7 lenses. The optical dates of the first lens: BK7, 165 diameter, 20 mm thickness, R1 = 0,
R2 = 503.78 mm Fokus ne = 546.1 mm
In my system the primary is a 300 parabola with a radius of -1819 mm, this would be a f/3.03 Newton mirror. The
secondary of this system is 110 mm in diameter, with R = -1046.92 mm and a conic constant of -4.78 ... (hyperbola)
The primary you can test it with that plan convex lens and this test is called the Ross-Null-test. You also can test
the secondary, if you use a BK7 glas for that, give it a calculated convex radius on the back and test this at last from
the back through the BK7 "lens" of the secondary to the scondary mirror surface and back to the pinhole or light
source. The last picture shows the light path.

The next foto shows my compensation plan convex lens with the convex surface to the mirror. In this setup you can test
all the conic values from elliptical mirrors, parabolas till hyperbolic mirrors. 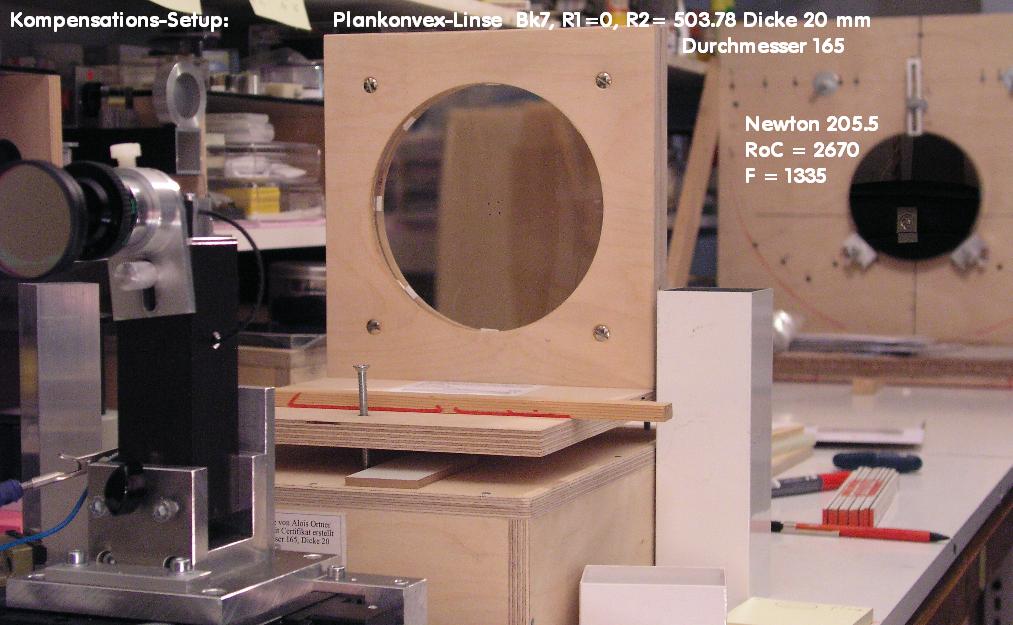 This RC-system can show, how to test the two optical components by compensation with a Null test. 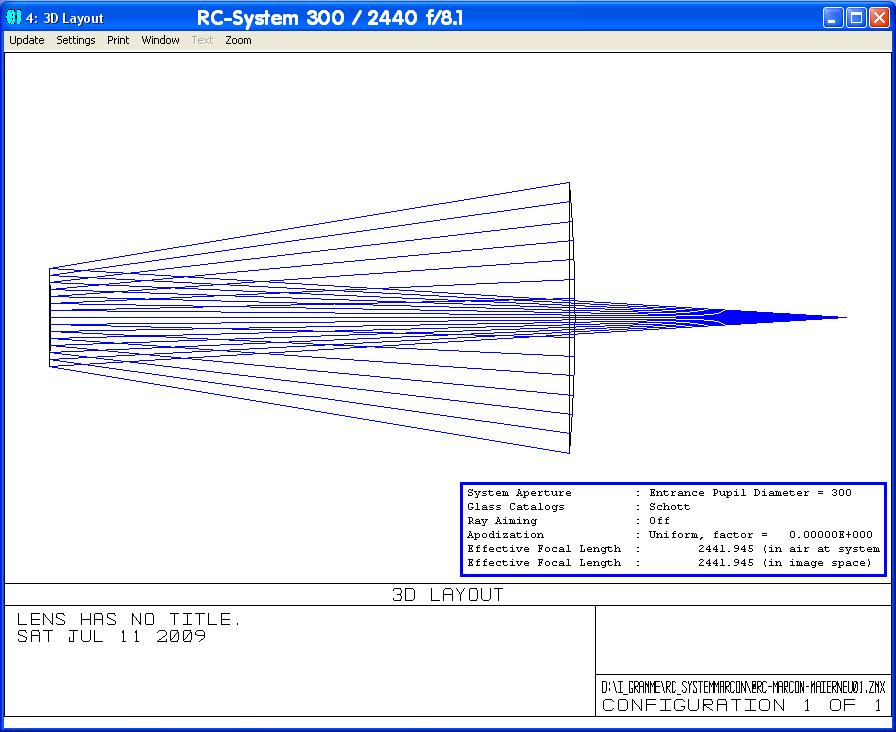 The system is calculated with ZEMAX and these are the parameters. 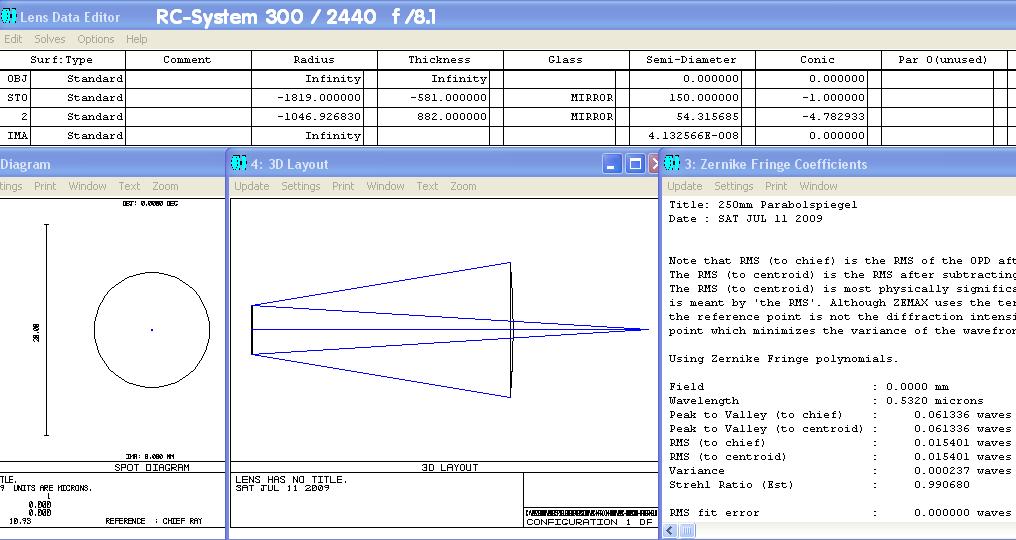 Now the compensation setup of the main mirror. It can be calculated as Ross-Null-Test with any other big plan convex lens.
The Dall-Null-Test, der Ross-Null-Test, (Spiegel-Test-Verfahren+Ross-0-Test) 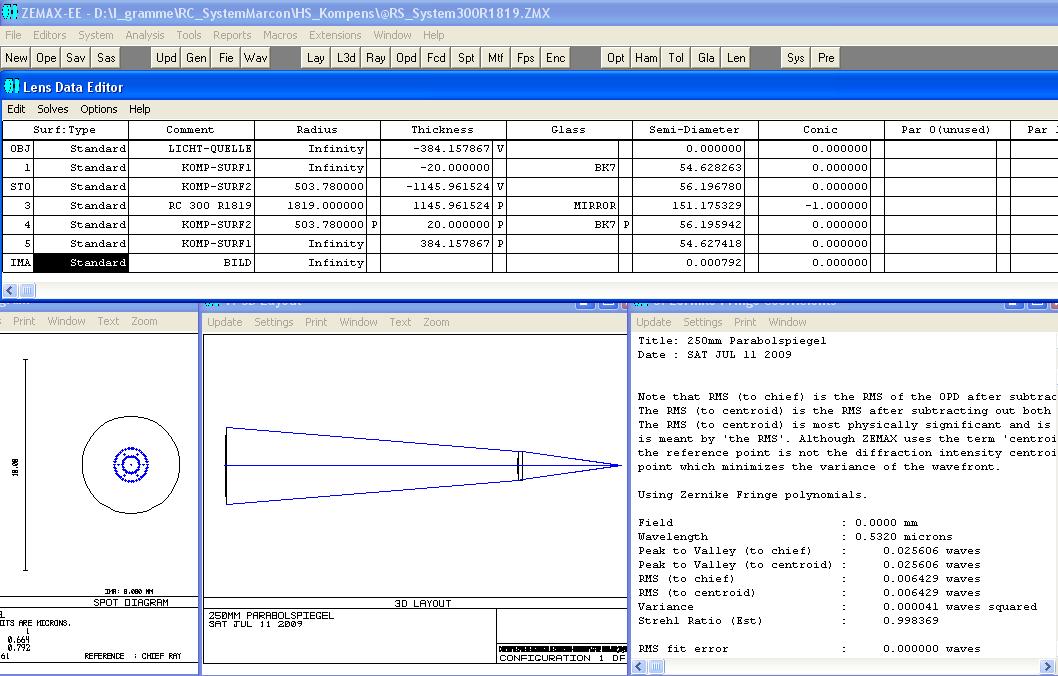 This is the setup for the secondary testing. The glas body compensates the conic constant of - 4.78 in a Ross-Null-Test 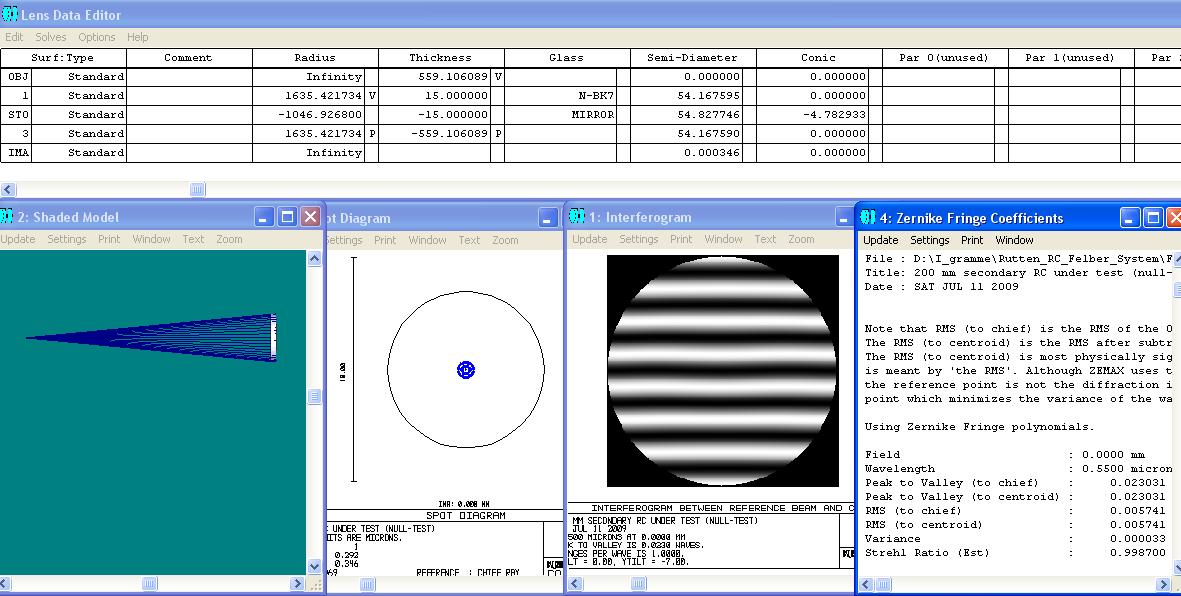 This shows the setup of that test again. Finally you can test the system at the sky or in front of a flat, water or oil surface.

The following notes describe a compensation test: A hyperbola mirror is compensated by the BK7 glas body in front of.
(Its the same prinziple. You are in RoC of a concav mirror with a positive BK7 lens in front of for compensating the hyperbola)

Some notes to the setup "testing the secondaries hyperbola surface from the backside" For this setup you use the
BK7 glas body as a compensation lens for testing the hyperbola: At first you have to grind the convex radius of the
sceondarys surface and the correct radius of the backside. After this you have to polish the backside just a little,
that you can test through the glas body in that way that you test a mirror with a BK7 lens in front of. Later you
polish the secorays surface and figure it by testing from the back with Ronchi and later with the interferometer.
At last you can test the complete system in front of a flat. 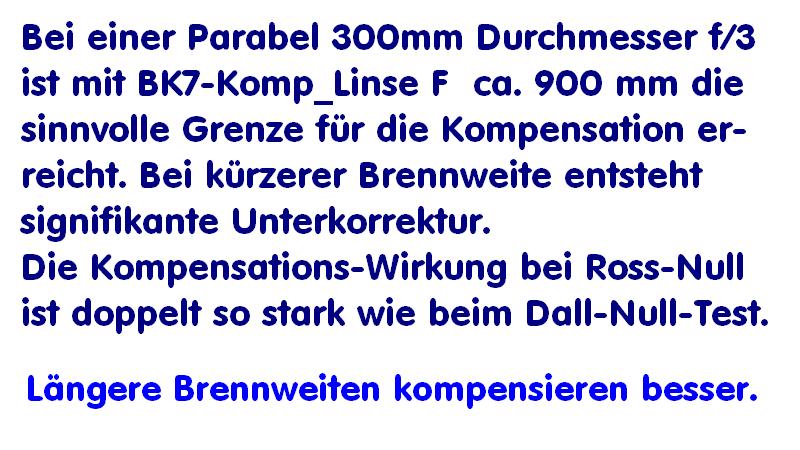